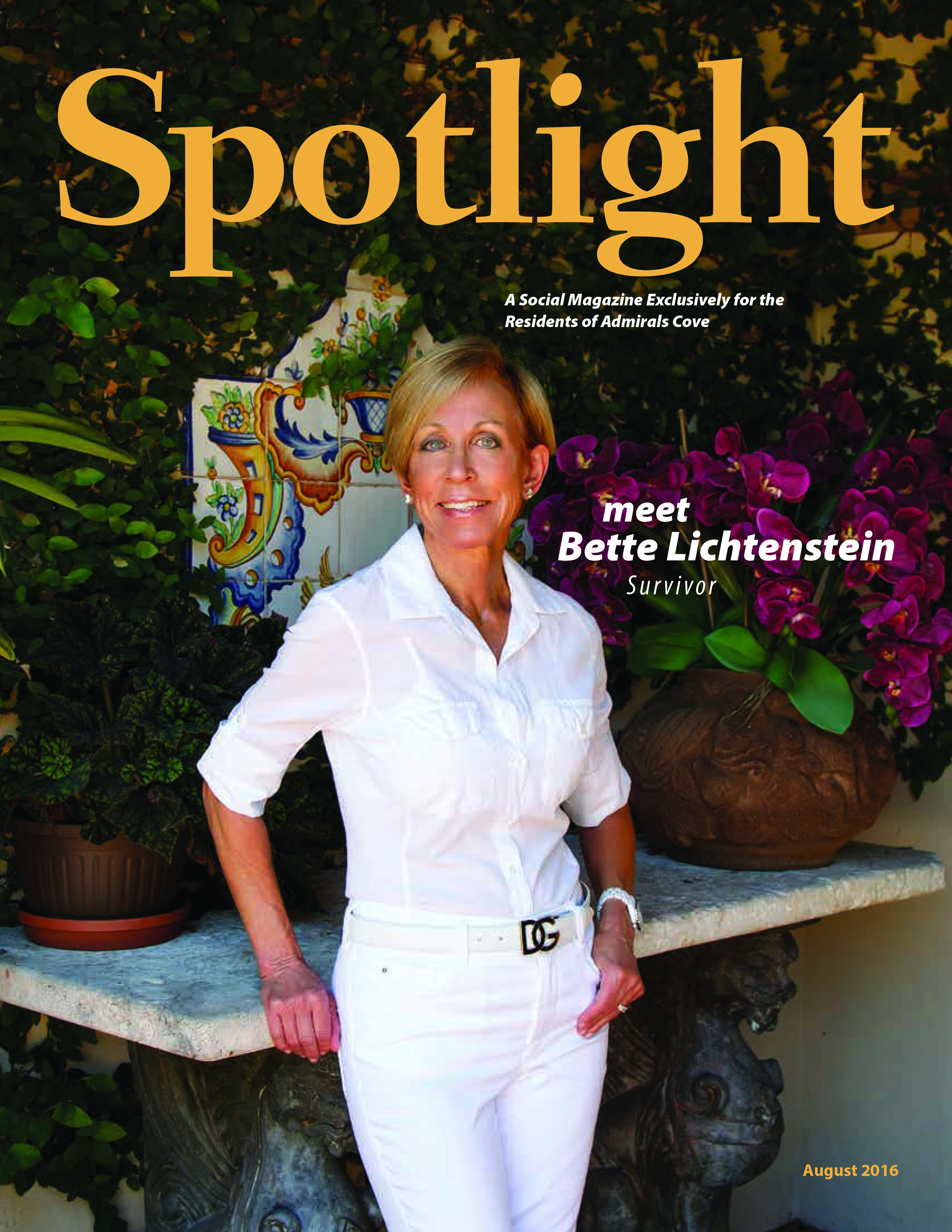 The first sign of trouble came at on an autumn day 6 years ago when Bette emerged from some bushes at her grandson’s birthday party with spittle dripping from her lower lip. The following day, on a flight to Los Angeles to visit her daughter, Lisa, she threw up three times and went immediately to the emergency room at Cedar Sinai Hospital.

Back in Jupiter the following week, Dr. Sheldon Taub, who suspected a diseased gallbladder, expanded his testing to an endoscopy, which revealed a large tumor midway in her esophagus covering 2/3 of the opening. Dr. Taub said to go to one of the four leading medical hospitals, MD Anderson in Houston, Sloan Kettering in NY, The Mayo Clinic, or Dana Farber.

Cary, Bette’s husband of 44 years, and Bette went home, not in panic, but to set about a game plan to find out where to go for her treatments. Their internet research was devastating, only to learn 2 weeks later after a PET scan that her tumor, Stage 3 esophageal cancer, was even more deadly, with an 8% survival rate.

Bette met her surgeon, a handsome Dr. Hofstetter, on the internet during an 8-minute video that carefully walked Bette thru diagnosis and their 3-pronged treatment of radiation, chemo, and esopghojectory, a brutal 8½-hour, 3-part surgery with incisions in the neck, side, and stomach, removal of the esophagus, and a pull-up of the stomach and fashioning a new esophagus.

Bette selected MD Anderson Medical Center in Houston, Texas, for two reasons: they had one of only seven proton radiation centers and Dr. Hofstetter’s bedside manner and record of 150 such surgeries per year, the most of any doctor in the United States.

Dr. Hofstetter warned Bette, a thin-framed 64-year-old female, that if she became anorexic she would not survive the surgery, which carried a 7% mortality rate. The normal ES patient is a large, big-bellied man with a history of drinking, smoking, and overeating.

A patient whose tumor is at the base of the esophagus loses 60-80 lbs. prior to surgery. Bette, a nondrinker, nonsmoker, was an anomaly to get this disease which the doctor concluded was just “bad luck.” The 8 weeks of chemo and radiation were only made more difficult by Bette throwing up at the beginning of every meal because of a buildup of mucus in her esophagus. She carried her sickness bags in her purse.

Unable to keep solid food down, Bette settled on scrambled eggs three times per day and refused anything unhealthy. Bette walked 6 miles per day throughout her ordeal, never once complaining. Bette is a very positive person, loves life, was a very active 9-12 handicap golfer prior to her sickness.

She refused to give in and was determined to keep her weight and strength up. The last day of radiation, Bette was led into the area where each patient bangs on a large gong. Proton therapy, the latest form of radiation, was touted to destroy less surrounding tissue. Early morning treatments were given to children exclusively with brain cancer. The circular building, a $358 million underground complex with four treatment rooms, looks like a room from 2001: A Space Odyssey. A big mechanical arm delivers the beam while circling the patient.

During treatment, Bette was visited by friends and family from Chicago, California, and Florida, especially her friends from Admirals Cove. After treatment, her driveway and garage were decorated with welcome home signs. It was a 6-week oasis to regain her white cell count and strength and then it was back to Houston for surgery.

The day of the surgery was daunting, not knowing whether she would even survive the ordeal. Losing only 3 pounds was due to Bette’s determination to live despite the long odds and eating difficulties.

The recovery was even worse. Six days of racking pain complicated by Bette’s very low blood pressure. Very little pain medication could be given for fear of throwing a stroke. No food or water, or even a wet wash cloth touched her lips for 7 days to allow the resectioned areas to heal.

Food was administered through a food tube which Bette went home with for a week. Bette hated it and wanted it removed. A friend, an Admirals resident and retired general surgeon, came over and removed it.

Bette’s determination to recover was nothing short of miraculous. Bette walked 6 miles per day, kept a healthy diet, went to Admirals fitness every other day, and prepared to return to golf.

Two setbacks interfered: two fractured vertebras on her very first full golf swing in her back where the radiation beam went through weakened her bone structure and a second surgery 6 months later to remove a lymph node out of the original surgical field.

Bette enters the card room. Rather than play the victim, Bette was determined to learn to play cards and enter the next phase of her social life. Bette today is a 5-year survivor, mentors other ES Cancer patients, and offers help at any hour of the day to newly diagnosed patients on their path through the disease.

She supports MD Anderson cancer charities. She advocates to everyone to ask their GI doctor to do an endoscope at the same time they do a colonoscopy. Doctors most often refuse to do so as it is not covered by insurance unless you say the magic words: “Dr., I have acid reflux,” or “Dr., I have GERD,” and then it is covered and the doctor will do it to cover himself. Bette had no symptoms and her doctor never did one.

There are 893 homes in Admirals Cove. Bette stated for this article that her purposes for doing this interview were: To make every member aware of the need for an endoscopy, for every member to spread the word to family and friends to insist on an endoscopy from their GI doctor. Bette was symptom-free and perhaps it could have been caught at stage 1 and not stage 3, a huge difference.

There is a link between obesity, smoking, and overeating and EC and the fact that it is the fastest-growing type of cancer as the population of obesity is getting greater among the younger population. Anyone with a “big belly,” smokers, and drinkers are at particular big risks.

If you know someone who is diagnosed with EC, get to a major medical center. Do not attempt to treat it locally, they don’t have the experience, as it is still considered a rare cancer and needs a highly skilled surgeon.

Lisa Lichtenstein | Golf on the Ocean?

Which paint colors are right for you?