While Gov. Gavin Newsom and Gov. Ron DeSantis go at it, Californians flock to Florida

While Gov. Gavin Newsom and Gov. Ron DeSantis go at it, Californians flock to Florida

Native Californian Angela Roaf’s migration from the Golden State to Florida was strictly a financial decision after she said additional taxes were heaped on her San Clemente house in 2016.

“We have to get out of here,” she remembers her husband, retired NFL player Willie Roaf, saying one morning.

Options included anywhere that did not have a state income tax, he told her. She nixed Nevada because she didn’t want to be landlocked. Texas was an option, but she isn’t a huge fan of the Gulf of Mexico waters.

She had lived previously in Florida, and the couple moved to West Palm Beach in 2016. Angela and Willie, a Hall of Fame offensive lineman who played for the Kansas City Chiefs and New Orleans Saints, have since settled in Hutchinson Island.

“San Clemente was a little slice of heaven,” said Angela Roaf, a client concierge with Echo Fine Properties. “We love California but, for me, Florida is my home. It was a life-changing decision but not a difficult decision.”

Nonetheless, it’s doubtful a testimonial from the Roafs might be featured in California Gov. Gavin Newsom’s TV ad campaign.

“Freedom, it’s under attack in your state,” Newsom said in the ad.

The Golden State’s governor, who comfortably won a recall vote last year, criticized DeSantis and Republicans here who he said are “banning books,” “making it harder to vote,” “restricting speech in classrooms,” and “even criminalizing women and doctors.”

The broadsides were references to legislation passed the past two years by the GOP-majority Florida Legislature, and signed into law by DeSantis, to ban abortions after 15 weeks, curtail mail-in voting and the use of electoral drop boxes as well as the Parental Rights in Education law that critics slammed as the “Don’t Say Gay” bill.

DeSantis did not let the ad go unchecked.

Speaking at an event in early July after the ad appeared, the governor took aim at Newsom as well as his management of California and San Francisco, where Newsom served as mayor and which DeSantis labeled a “hellhole.”

“I think ultimately, his biggest albatross, no matter what he runs for nationally, is, do you really want to live like California? A state where people are fleeing,” DeSantis riffed. “A beautiful city like San Francisco, these guys have ruined it. It’s a city where people are going to the bathroom out in the street. Where you have people shooting needles of heroin in their arm right outside the door of a $4 million home. These have become hellhole cities because of left-wing politicians. And that’s the state and these are the things he supports.”

Californians move to Florida, but not at rate from New York, New Jersey

The back-and-forth between the two governors from partisan bellwether states sparked 2024 White House speculation. But the political mano-a-mano aside, there’s no doubt people from three of the biggest and most stalwart blue states are finding a new home under the Florida sunshine.

Excluding foreign countries, New York topped the list in 2021 for the most driver’s licenses turned in for ones with Florida addresses at 42,224. That was followed by New Jersey at 32,083, according to data from the Florida Department of Highway Safety and Motor Vehicles. 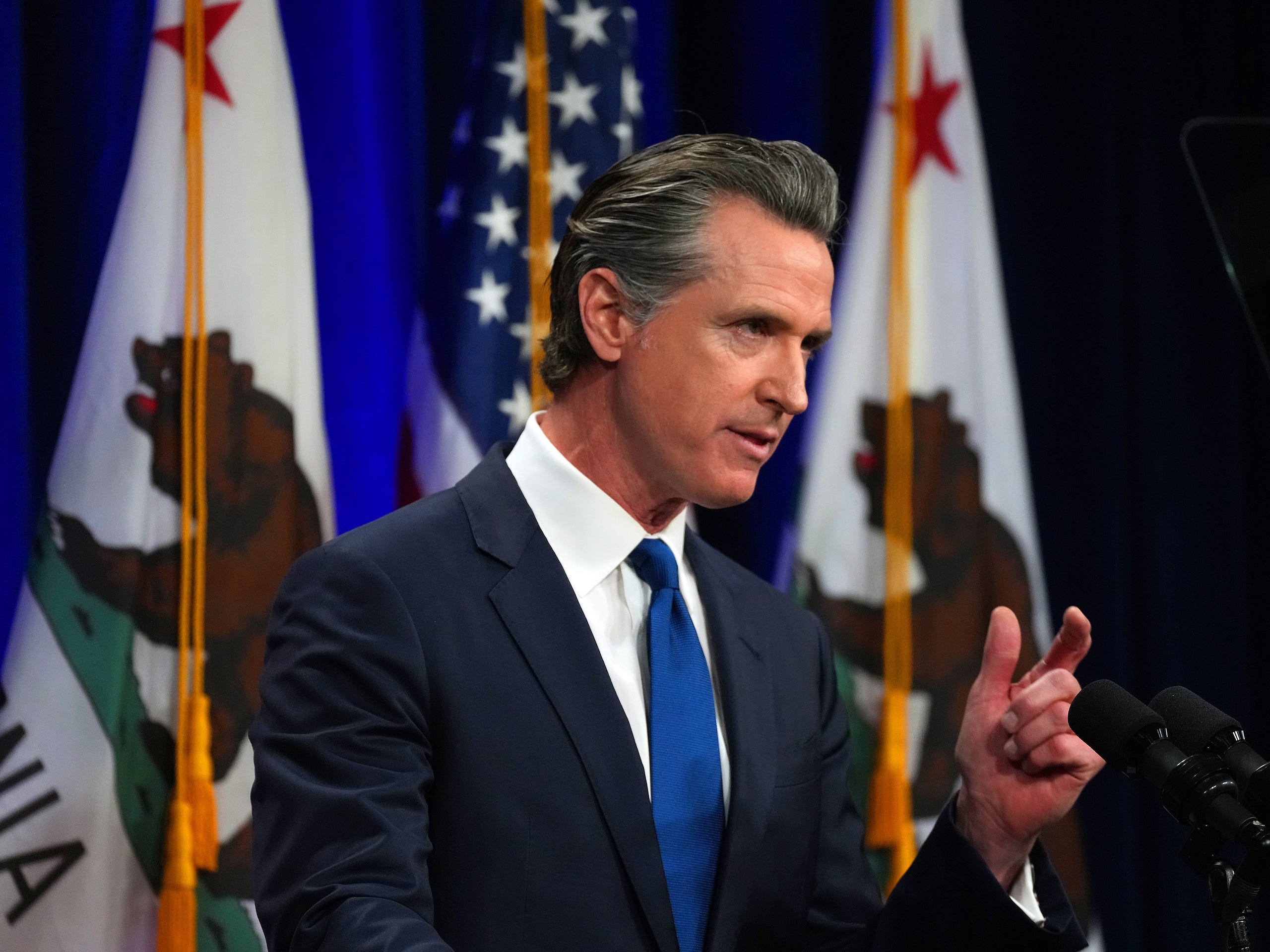 California Gov. Gavin Newsom, a Democrat, delivers his State of the State address in March, in which he took several swipes at the state of … Show more
JIM WILSON, NYT

California ranked third-highest among the states in the number of driver’s license exchanges in 2021 with 27,081, a notable 43% higher than the 5-year average and 55% higher than 2020.

Illinois, Pennsylvania, Georgia, Texas, Ohio, Virginia and Massachusetts rounded out the top 10 of most license swaps last year. All were higher than the 5-year average.

Between Jan. 1 and May 31 of this year, 235,261 people statewide exchanged out-of-state driver’s licenses for ones from Florida. That’s a 30% increase for the same five-month period over a seven-year average from 2016 through 2022.

California’s license exchanges through the end of May were a 60% increase from the seven-year average. The top three counties where Californians indicated they were living were Miami-Dade (1,224), Broward (825) and Palm Beach (800). 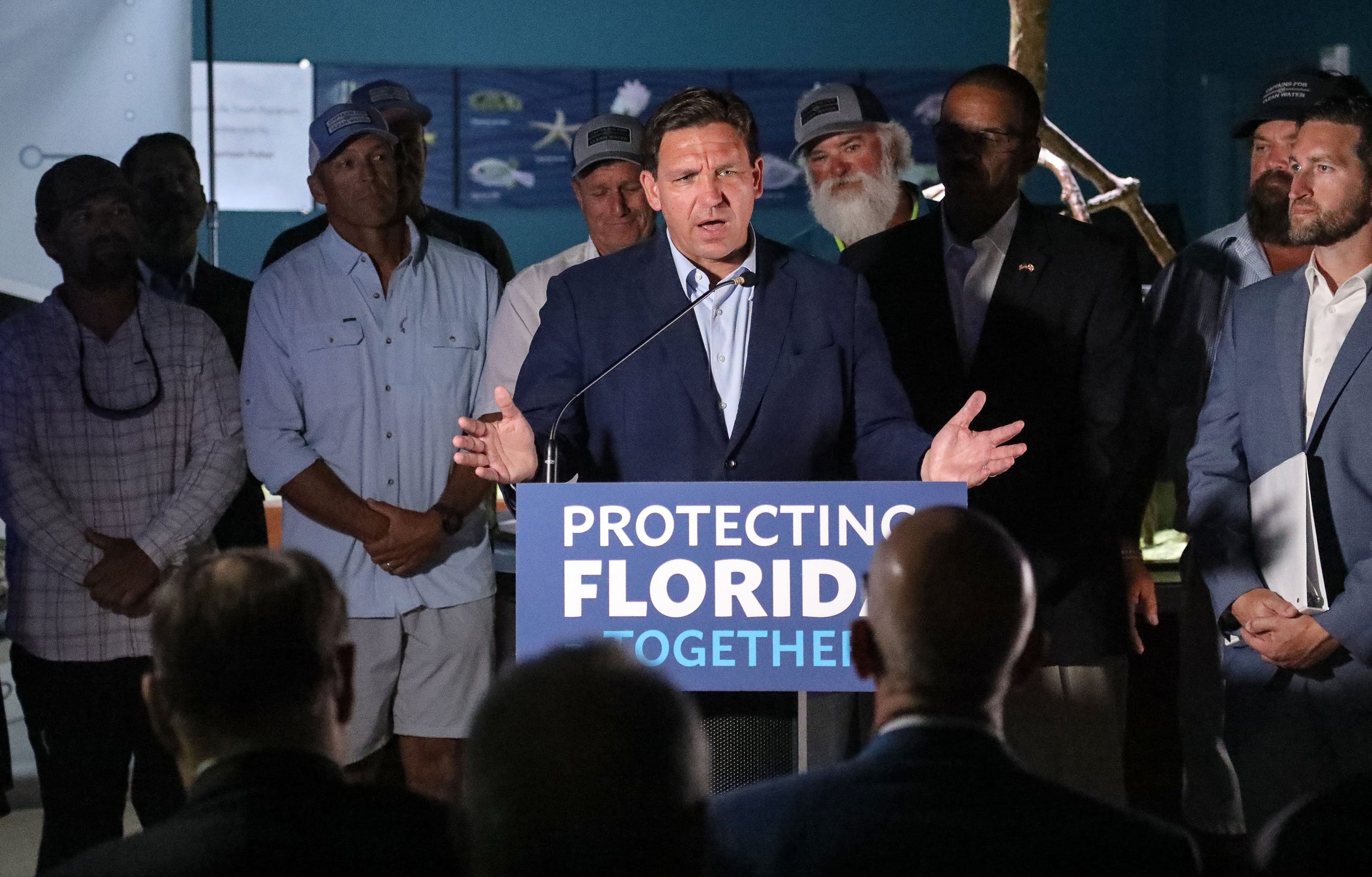 David Weinstein, a Realtor with Keller Williams in Boca Raton, said the housing market has cooled because of economic uncertainties and higher interest rates but that before the slowdown he had an influx of clients from California.

He said it was notable because West Coast clients were rare in the past. Although he is reluctant to talk politics, he did ask why people were moving.

“The only thing I can say is that they mentioned the cost of living, homelessness and just that they preferred a red state,” Weinstein said. “For whatever reason, the pandemic awakened this movement of people who weren’t coming before.”

The California Department of Motor Vehicles does not collect data on how many driver’s licenses or license plates are traded in from other states, according to its media relations office.

But in May, the California Department of Finance released data showing a loss of 117,552 residents in 2021. That’s on top of a 2020 decline of 182,083 residents. The state said the losses were a combination of COVID-19-related deaths, federal policies restricting immigration and an increase in people moving out of state.

Victoria Lorusso, a Realtor with Echo Fine Properties in Palm Beach Gardens, said she noticed an increase in calls from Californians in the fall of 2020. At open houses, Lorusso said Golden State residents looking to move to Florida tread carefully around politics. But if they felt they had a sympathetic ear, they would just “spew.”

“They seemed so happy to have someone to talk to and tell how they were just disgusted with the high taxes and the government and how they just wanted out,” Lorusso said.

She had clients from California buy a home in Wellington this year. The couple, who lived about an hour north of Los Angeles, said they were frustrated by high taxes and what they considered a lack of infrastructure to handle an influx of immigrants.

“They were seeing things rapidly going downhill and by the time they got their house ready to sell, the value had dropped,” Lorusso said.

Californians were leaving before the pandemic hit, but COVID-19 accelerated the moves, said Joel Kotkin, a presidential fellow in urban futures at Chapman University and co-author of the 2022 report Restoring the California Dream.

The report notes California’s loss of well-paying blue-collar jobs, high taxes, high energy costs and more regulatory controls. In a graphic on median household income adjusted by the cost of living, California ranked 49th — beating only Hawaii — for lowest in the nation.

But Florida ranked 46th, according to the graphic based on The U.S. Census’ American Community Survey of 2019.

“(Californians) were asking, ‘If we get a bad flu, are we going to go into lockdown,’” Kotkin told The Palm Beach Post in February. “Maybe there was a bigger risk in Florida, but you could do things there that you couldn’t do in California or New York.”