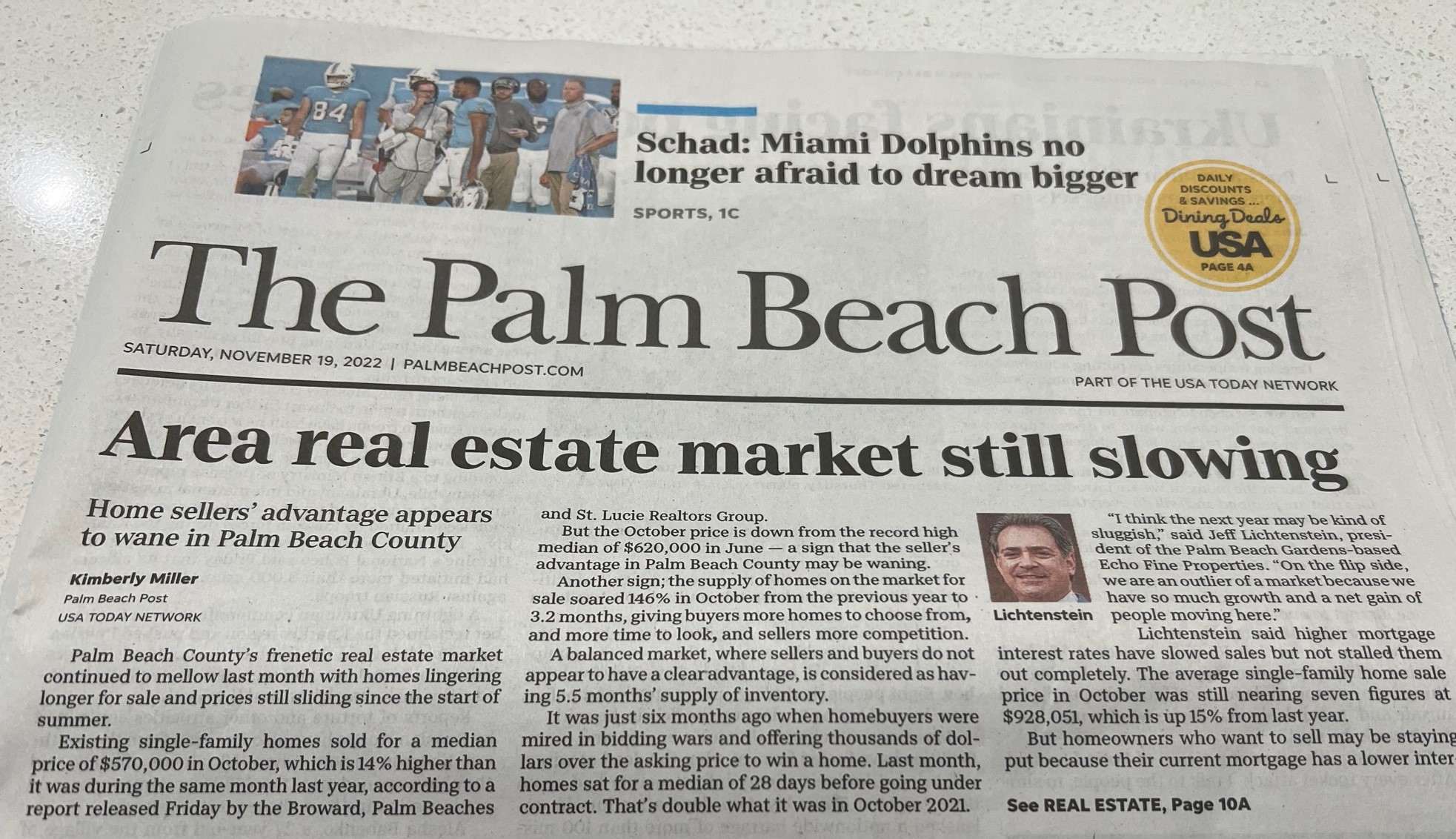 Existing single-family homes sold for a median price of $570,000 in October, which is 14% higher than it was during the same month last year, according to a report released Friday by the Broward, Palm Beaches and St. Lucie Realtors Group.

But the October price is down from the record high median of $620,000 in June — a sign that the seller’s advantage in Palm Beach County may be waning.

Another sign; the supply of homes on the market for sale soared 146% in October from the previous year to 3.2 months, giving buyers more homes to choose from, and more time to look, and sellers more competition.

A balanced market, where sellers and buyers do not appear to have a clear advantage, is considered as having 5.5 months’ supply of inventory.

It was just six months ago when homebuyers were mired in bidding wars and offering thousands of dollars over the asking price to win a home. Last month, homes sat for a median of 28 days before going under contract. That’s double what it was in October 2021.

“I think the next year may be kind of sluggish,” said Jeff Lichtenstein, president of the Palm Beach Gardens-based Echo Fine Properties. “On the flip side, we are an outlier of a market because we have so much growth and a net gain of people moving here.”

Lichtenstein said higher mortgage interest rates have slowed sales but not stalled them out completely. The average single-family home sale price in October was still nearing seven figures at $928,051, which is up 15% from last year.

But homeowners who want to sell may be staying put because their current mortgage has a lower interest rate than what they could get today. Buyers looking to purchase a home may be waiting for rates to come down.

On Friday, the weekly average rate for a 30-year fixed mortgage was 6.61% according to the government-sponsored enterprise Freddie Mac. Freddie Mac purchases, guarantees, and securitizes home loans.

To help buyers, sellers could offer to pay down the interest rate, expert says

To sweeten the deal for buyers hesitant to purchase a home with the current rates, Lichtenstein said sellers could opt to pay down the interest rate for the buyer for two years. The plan, which is called a “temporary buydown,” can lower the interest rate by 2 percentage points in the first year of the mortgage and 1 percentage point in the second year. After that it would revert back to the original rate.

“Instead of during the pandemic when there were all these strategies to win a home, it’s reversed, and now we’re looking at what can we do to creatively sell a home,” Lichtenstein said.

Realtors are hoping sales will pick up as the season digs in. The number of single-family homes sold in October was down 29% from last year.

“This lull has been a little weird,” said Mae Ferguson, founding agent and senior global real estate adviser for Sotheby’s West Palm Beach office. “We went from going 100 mph to a normal summer.”

Kelly Smallridge, president and CEO of the Business Development Board of Palm Beach County, said many of the Wall Street companies putting down roots in West Palm Beach are in the process of moving.

Kelly Smallridge, president and CEO of the Business Development Board, said she expects to see a bigger push of people moving down here when buildings …
GREG LOVETT/THE PALM BEACH POST

With most existing office buildings already leased, she expects to see a bigger push of business and employee relocations when buildings such as One Flagler are finished.

“When the newer buildings near completion, you will start to see more movement in the (housing) market,” Smallridge said. “Summers are always slow, but we are getting back into season.”

Real estate economists say housing markets in some areas of the country are cooling off, with average home prices in September falling in 39 of the 100 largest cities. The most significant drops are happening in the West, including San Jose, Calif., Austin, Texas, San Francisco, Boise, Idaho and Salt Lake City, Utah, according to a study from Florida Atlantic University and Florida International University.

In Florida, five housing markets still rank in the top 10 nationally for most overvalued, Those include Cape Coral, Palm Bay, Deltona, Lakeland and Tampa.

The Miami metro area, which includes Palm Beach, Broward and Miami-Dade counties, ranked 38th on the most overvalued market list with buyers paying about 40% above long-term pricing trends.

“Despite what they are saying nationally, most Florida municipalities are not seeing average price decreases,” said FAU real estate economist Ken H. Johnson. “We’re not going to get off scot-free, but we’re not going to wake up and see a major downturn in prices of 50% like we did 15 years ago.”

Johnson said it could be years before incomes catch up with the spike in housing costs. An analysis this month from the online brokerage firm Redfin found that homebuyers in South Florida need to earn $128,892 a year to afford a mortgage payment that meets the benchmark of spending no more than 30% of income on housing.

The Redfin report blames higher mortgage rates for the hike in salary needed to afford a mortgage. That doesn’t mean there’s going to be a housing bust, but sales may slump until interest rates settle.

“I think a year from today we will see home prices really spike again,” Lichtenstein said. “The reason is, the demand is still there.”

Realtors prefer to use the median price as a measuring stick because it is the midpoint where half of the properties sell for less and half for more. It isn’t as easily skewed as the average price, which can have steep fluctuations based on a bulk of lower-end sales or one mega sale.