A subdivision of Brickell. 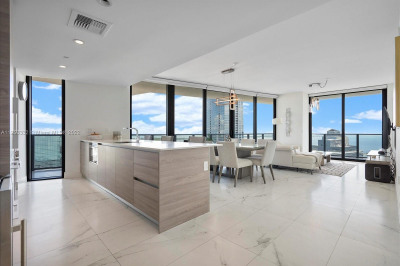 View All 29 Listings For Sale

The SLS Condo Hotel is a modern and stylish new condominium in the highly sought-after area of Brickell, Miami. SLS has become one of the most popular and famous lifestyle brands in America, with locations in Beverly Hills, Las Vegas, New York and South Beach.

SLS Brickell is a brand new mega-tower with a hotel on lower floors and one, two and three bedroom private residences on the upper floors, as well as exquisite penthouse suites on the top floor. Each unit is kitted out with elegant kitchens featuring top of the line appliances, stylish bathrooms, master suites, and floor to ceiling windows with stunning views of the city and bay.

Residents can make use of the outstanding amenities and services at SLS Brickell. World-class restaurants and bars on-site include Katsuya, Bazaar, Hyde Bar and a restaurant by Michael Schwartz of the renowned Michaels Genuine. SLS Brickell also includes luxuries such as an exclusive resident only rooftop pool and lounge area, CIEL private Spa and state of the art fitness center, party room, Hyde lounge, business center, and screening room. There is also 24/7 concierge and valet parking available.

The Brickell area has become one of the most coveted in all of Miami due to its atmosphere, and location. From SLS residents can take a short stroll to many of Brickell’s world-class bistros, chic boutiques, and an eclectic mix of cafes and bars. Brickell has superb transport communications to the rest of Miami, and is a short drive from Miami International Airport and Miami Port. There are many parks and sports stadiums nearby, as well as the beautiful Biscayne Bay and South Beach.

Always a highly sought after area for the best in Miami Real Estate, you might also want to take a look at Latitude On The River, Santa Maria, or ICON condominiums in Brickell, or nearby neighborhoods such as the Central Business District.